Below you can find a list of inspiring documentaries for seniors.

All of these documentaries relate in one way or another to the age group of 60andMore.

A documentary that makes you excited: a must-see. It tells the humorous, sincere and life-affirming story of an older Waiheke hip hop dance group and their life-changing journey to the world hip hop championships in Las Vegas. By consciously choosing to be different in life, remarkable things happen around you and yourself. This film was selected for the International Documentary Festival Amsterdam, 2014. A short version of this film can be found by following this link.

A short documentary about a different way of ‘getting older’. They call themselves the Youngsters and for them ageing has nothing to do with watching the world go by. They are full of life. They represent a large group of people who are reinventing the old. At Vimeo you can see the entire documentary of about 20 minutes: the Youngsters. 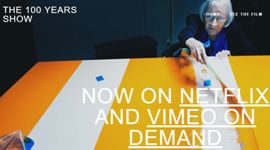 The 100 Years Show is a short documentary that follows the Cuban-American abstract, minimalist painter Carmen Herrera on her 100th birthday. The film is directed by Alison Klayman. Carmen Herrera, who was an avid artist all her life, did not get a break until she was 85. An artist who never stopped working.

There are many interviews on Youtube with people who have passed the age of 100. In this documentary of about 15 minutes, three 100+ year olds from England are interviewed. They answer questions about how they look back on their lives. A beautiful statement from one of them: ‘You just have to continue. It is just a number. 101 is just a number. ‘ 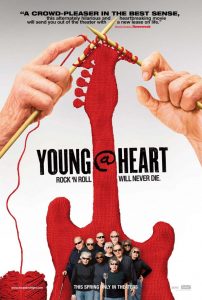 One of those inspiring documentaries about seniors is Young @ Heart from 2007. It tells the story about the lead-up to a concert by the “Young at Heart” choir, whose members’ average age is 81. It is a true story showing the last weeks of rehearsal when most singers go against their health to participate. Their choice of music is surprising and goes against the stereotypical taste of their age group. It features, for example, James Brown and Sonic Youth.